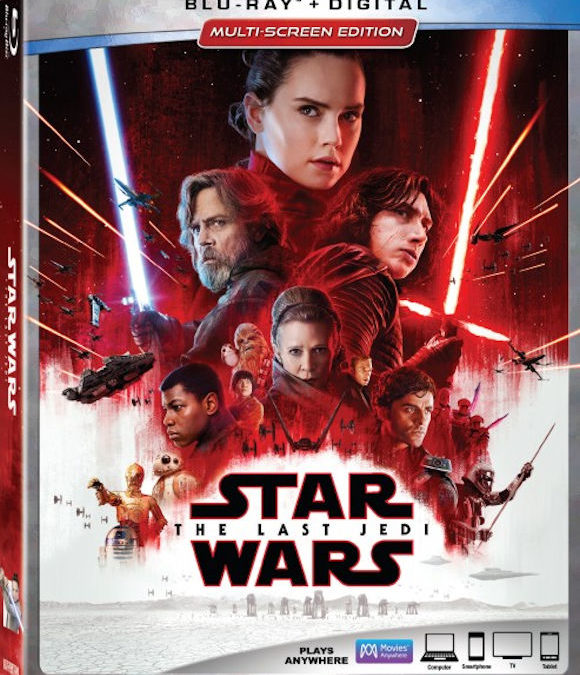 `The Last Jedi’ Coming to UHD Blu-ray With Dolby Vision

Disney revealed Tuesday that it will release on March 27th the box office blockbuster Star Wars: The Last Jedi in 4K Ultra HD resolution with Dolby Vision HDR as part of a package of added features.

The 4K Ultra HD Blu-ray release will offer the Full HD and 4K Ultra HD versions of the film, the latter of which will include high dynamic range (HDR) color and contrast boosting highlights in both the Dolby Vision and baseline HDR10 profiles, the latter is mandated for inclusion by the Blu-ray Disc specifications.

High Dynamic Range information is comprised of instructions to a compatible TV for adjusting color and brightness levels in specific areas of a picture. In the HDR10 version, this is done as static metadata which maintains one grading level throughout a title, but Dolby Vision uses dynamic metadata that carries additional information to adjust color and brightness on a scene-by-scene or even frame-by-frame basis for more natural-looking effects.

Read more about the 4K Ultra HD Blu-ray release of The Last Jedi after the jump:

For those who just can’t wait until March 27th, the 4K version of the film will be available on the Movies Anywhere streaming content locker service on March 13th. But that version will omit the 100 Mbps high bit rate of the disc, and a host of extra features.

In addition to 4K resolution and two flavors of HDR, the UHD Blu-ray will include a soundtrack with Dolby Atmos 3D object-oriented surround sound, that provides height channels and audible effects that seem to follow on-screen images around the viewer. This will be Disney’s first Ultra HD Blu-ray release in both Dolby Vision and Dolby Atmos.

Other features include: 14 deleted scenes; behind-the-scenes shorts including “The Director and the Jedi” and “Balance of the Force,” and breakdowns of three scenes in the film.