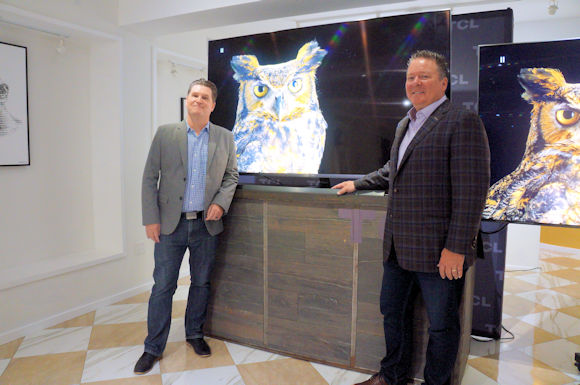 With up ro 25,000 mini-LEDs (in the 75-inch model) in the back light, TCL will exponentially increase the number of local dimming zones for greater black levels and brighter highlights. TCL has said this will be the brightest LED LCD TV on the market, but does not disclose the exact measurement.

The televisions will include support for internally decoded Dolby Atmos audio to bring a more dispersed and realistic surround sound effect from the set’s speakers. This will use psycho-acoustic signal processing to create a virtual 3D immersive surround sound experience without the presence of actual up-firing speakers. The televisions also will pass through Atmos sound to compatible Dolby Atmos soundbars and home theater AVRs over the set’s HDMI-ARC port.

Other features in the 8-Series models include: Quantum Contrast, support for the HDR10, Dolby Vision and HLG high dynamic range profiles, four HDMI inputs, support a new Auto Game Mode (this sounds like ALLM but TCL prefers to talk about the benefits without naming the technologies).

Quantum Contrast is said to yield “a significant jump in total TV brightness, substantial increase in Contrast Control Zones (local dimming zones), smoother and improved even light distribution throughout the screen, enhanced uniform reproduction of color across the screen, wider viewing angles and a slimmer design.”

Another feature available to the 8-Series models is a new smartphone based calibration app, designed to use the mobile device’s built-in camera as the colorimeter, while enabling users to simply run the diagnostic and correction adjustments in the mobile device software for quick and easy color correction when a full professional calibration isn’t performed. The app will only work with select phone models (only Pixel and iOS devices have been approved so far) that TCL has identified as capturing a true D65 white balance for accurate color temperature measurement.

“By leveraging TCL’s massive R&D team and our unique vertical integration capabilities, we are able to develop a solution that will provide broad color volume and stunning whites, while displaying the inky blacks that our users are demanding. The 8-Series is a testament to what we can accomplish with innovation that meets those needs. There are very few display devices available at any price that can match the cinematic picture and audio quality that these sets can deliver,” said Chris Larson, Senior Vice President, TCL.

The TVs feature a new bezel-less design called “FullView,” and for smart TV, TCL continues to use the Roku TV platform offering an easy-to-use interface with hundreds of streaming apps providing access to thousands of movies and TV episodes. This includes Easy Voice Control which allows compatibility with popular third party voice assistants to give users additional options to control the TV via the Roku remote, third-party device or mobile app.

In addition, Roku Voice makes it easy to launch streaming channels, search for entertainment, turn the TV on and off, switch inputs and more. Now, when customers use voice on their remote control to search for specific movies and TV shows on nearly 40 channels, their TV will begin playback rather than display search results.