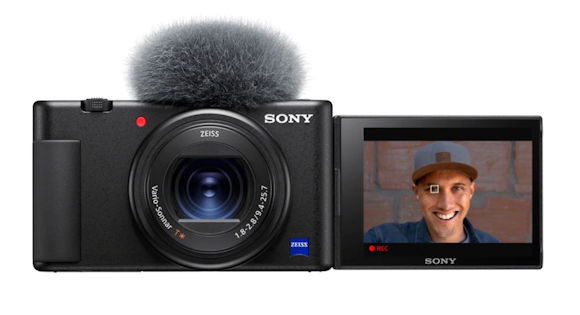 The Sony ZV-1 (shipping in June at a limited-time $749.99 introductory price – $799.99 suggested retail) was designed for ease-of-use and high-performance video quality from users with a wide range of skill levels.

The ZV-1 offers most of the same internal capabilities as the popular RX100 VII, including 4K Ultra HD resolution and Sony’s collection of useful picture profiles, eye-centered autofocus etc. At the same time it has removed some more expensive systems that are less critical to the vlogging experience to keep the price affordable.

Sony said the camera is based on the same core as its popular RX100 point-and-shoot camera line, but is optimized for video through the addition of new features to make it faster and easier for people who shoot, edit and post a lot of video footage on their own.

These include a handful of new focus modes optimized for video blogging including a one-button setting for “background defocus” giving users a quick and easy way of adding professional level background bokeh to images without having to manually adjust the aperture and shutter settings on the fly.

Also added was a use-specific feature called “Product Showcase.” This enables quickly setting up the camera to keep the camera focused primarily on faces and objects so that the camera will instantly focus on object coming into the frame in front of a talking face without the item going blurry as the host tries to show it to the audience.

This is expected to be a boon to YouTubers with channels that feature a lot of new product introductions and reviews without the host have to continually put their hands up close to the lense to get the autofocus to kick in.

It is also said to offer versatile audio recording capability. The ZV-1’s onboard Directional 3-capsule Mic was designed for forward-directional audio capture, allowing for clear capture of the subject’s voice while minimizing background noise, especially when operating in selfie mode, Sony said. The ZV-1 is equipped with an industry standard 3.5mm mic jack and Multi Interface Shoe (MI shoe) allowing the easy addition of a wide range of external microphones. Other sound features in ZV-1 include a supplied wind screen accessory that fits on the MI shoe.

The ZV-1 is equipped with a side-opening Vari-angle LCD screen, that Sony said should make it easier for users to compose shots in selfie mode while allowing connection of external audio accessories. The camera also offers in-body image stabilization for smooth steady shots.

Other features include support for Hybrid Log-Gamma (HDR), S-Gamut3.Cine, S-Log3, S-Gamut3 and S-Log3; interval shooting for time-lapse videos; Super Slow Motion recording at up to 960fps; compatibility with “Movie Edit add-on” from the Imaging Edge mobile application for image stabilization while editing and highlight ability to edit aspect ratios for IG.