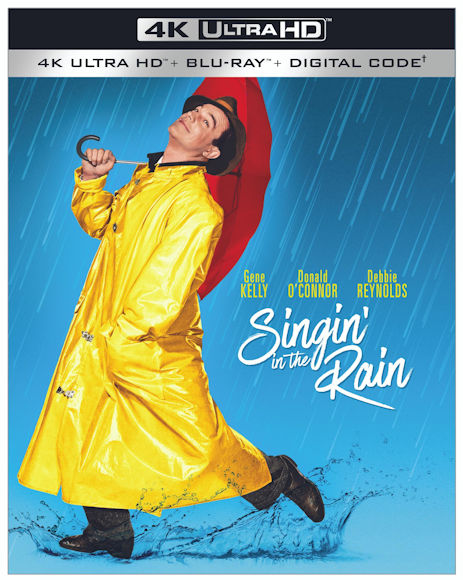 Since it was first released, Singin’ in the Rain has been widely considered to be one of the greatest musicals in cinematic history. The musical romantic comedy was directed by choreographed by Gene Kelly and Stanley Donen and stars Kelly, Donald O’Connor, Debbie Reynolds, Jean Hagen, Millard Mitchel and Cyd Charisse.

The Ultra HD Blu-ray Combo Pack will be available for a $24.99 suggested retail price and will include an Ultra HD Blu-ray disc with the feature film in 4K/HDR as well as a Full HD standard Blu-ray Disc version.

The Ultra HD and Blu-ray Discs will include previously released special features including the following:

Warner Bros. will also offer Singin’ in the Rain in 4K via digital purchase from select digital online retailers beginning on the same date.

The remastered film will screen at the TCM Film Festival on April 24. TCM Big Screen Classics will also present the 70th anniversary of Singin’ in the Rain in theaters this April in the United States. Tickets are on sale at www.FathomEvents.com.

O’Connor won the Golden Globe Award for Best Actor – Motion Picture Musical or Comedy, and Betty Comden and Adolph Green won the Writers Guild of America Award for their screenplay, while Jean Hagen was nominated for the Academy Award for Best Supporting Actress.

In 1989, Singin’ in the Rain was one of the first 25 films selected by the United States Library of Congress for preservation in the National Film Registry for being “culturally, historically, or aesthetically significant”.