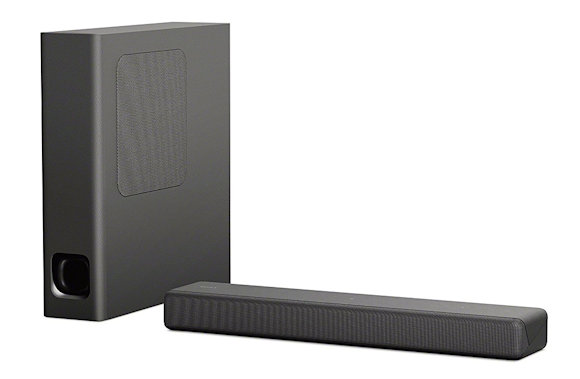 The Sony HT-MT300 compact 2.1-channel Bluetooth soundbar with matching diminutive subwoofer provides enhanced television sound and music from mobile devices and source components to get the most out of a small to medium-sized TV.

The Sony HT-MT300’s small size, easy of use and affordable price (at $298 on Amazon as this was posted) make it a great choice for TV owners with small viewing spaces or students away at college. The system’s clear, enhanced dialog delivery also makes it a great option for those having trouble hearing or understanding dialog through their television’s tiny or poorly placed built-in speakers.

The HT-MT300 is also adaptable as a Bluetooth speaker that can be placed anywhere within access to a power outlet to listen to music from a smartphone or tablet, to stage an instant, spontaneous party on a deck or rec room.

TV owners will also find that big sound emitted by the soundbar and subwoofer transforms their flat-sounding TV experience into a true home theater when used in smaller-sized rooms. Owners of larger TVs measuring 50 inches or larger, or those placing the HT-MT300 in a large viewing room, might want to check out more powerful soundbars, like Sony’s HT-ST5000 or Samsung’s HW-K950 for a more immersive experience.

Read our review of the Sony compact HT-MT300 Bluetooth soundbar after the jump:

The HT-MT300’s biggest asset is its compact wireless design. Both the soundbar and the matching slim subwoofer take up very little space. In fact, the subwoofer is thin enough to fit under a sofa, where the viewer can better feel the rumble of deep low tones and explosions. The HT-MT300 is available in either matte black with gloss black side and back panel accents or white color options. A metal mesh grill conceals the front-firing speakers positioned on the left and right ends of the device.
Placed on a black stand or table surface, the black version of the HT-MT300 becomes almost invisible under a television screen. The subwoofer has a gloss black speaker port positioned on the top of the matte black front plate. The rest of the cabinet, except the black metal back plate, is made of matching textured matte black plastic.

On top of the soundbar, Sony has placed hidden capacitive touch buttons that control volume, input selection, Bluetooth pairing, and power. The soundbar doesn’t have a digital readout or on-screen menu. A series of LEDs on top of the soundbar indicate the selected input, sound mode, etc. This can be a little frustrating when trying to switch between music and movie sound modes from a seated listening position.

Setup was the quickest and easiest of any soundbar we’ve tested. The soundbar and sub each have power cords, and other than that the only cable that’s required is the supplied optical TOSLINK connection to the TV. Bluetooth pairing of the components is as easy as pressing a button.

The integrated remote supplied with the system controls both the soundbar and the subwoofer, offering separate volume controls for each device.

What’s sadly missing is an HDMI Audio Return Channel (ARC) with CEC, which prevents using the TV’s remote for both picture and sound. It also limits the soundbar’s ability to receive advanced surround sound formats, requiring they be down mixed to accommodate the 2.1-channel capabilities of the unit.

The Sony HT-MT300 soundbar offers different experiences depending on the sources its fed. For example, listening to live TV from cable or satellite, the dialog can sound direct, hollow and narrow, but when switched to a Blu-ray player with advanced surround sound support, the music and sound effects are more spread out. The HT-MT300 has a full-sounding bass accompaniment from the sub, but this is sometimes less defined and muddy than in more expensive systems. Fortunately, dialog remains clear, if somewhat boxy, against the full palette of sound.

The voice-over narrative from Mad Max at the start of Mad Max: Fury Road booms and the roaring engines from the future world rat rods rattled the pictures on our wall. Similarly, the exploding flak in the bombing run scenes of Unbroken jolted us as it blasted out against the din of the aircraft engines. Nicely, this didn’t step on dialog from the plane’s crew and kept our attention attuned to the action on the screen.

Overall, music from CD sources (in music mode) was good, if somewhat boxy and hollow, while lacking the wider sound stage we heard in Dolby Digital Plus movie soundtracks. The remote offers a few EQ enhancement settings that can be applied to both movie and music modes to fine tune the sound to desired levels, but even this only goes so far with a soundbar this small.

The sound bar’s attempts at delivering any sense of real surround sound were disappointing, as we were never fooled into believing the audio elements were coming from anywhere but under the TV screen or the subwoofer’s location on the floor. Even Dolby Atmos sound tracks were reduced to flat two-channel stereo, but full sounding enough to keep us engaged in the story telling.

The Sony HT-MT300 is a good little soundbar for listeners with small rooms, generally small or mid-sized TV screens and small budgets. The compact design makes it easy to move, and setup from room to room and the wireless sub will put some kick into the tired sound that we’ve all come to expect from lower-priced flat-panel television sets. The added versatility of being able to take the soundbar on the deck or into the kitchen to listen to music over Bluetooth connections is a bonus.
For its price and place in the market, the Sony HT-MT300 is a recommended option for anyone looking to get more out of budget range flat-panel TV.

The Sony HT-MT300 used for this review was a company loan.