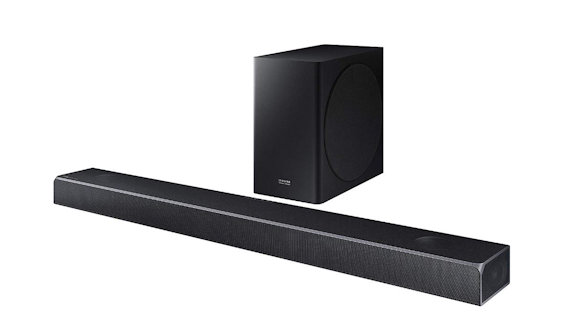 Samsung has been introducing truly impressive soundbars in recent years and this year’s Q series lineup is no exception.

This year, Samsung changed the model numbering nomenclature for the soundbars to match the numbering of the top four models in its high-end 4K Ultra HD QLED TV series. In general, the soundbars and televisions of similar numbers match up pretty well, although there are good reasons for stepping up the soundbar regardless of the TV model number or screen size.

The Samsung HW-Q80R Soundbar is identical to the flagship Q90R in most ways except one — it doesn’t have the high-end model’s wireless rear-channel surround sound speakers with upfiring height channel drivers. Without the rear effects, the overall surround sound experience feels somewhat empty from behind, although the speaker array does an admirable job of filling in the sides and front channel effects.

Users will have the option of adding on the rear-channel speakers, model SWA-9000S ($179.99 retail), after purchase, but these will not have the upfiring rear-channel drivers that are included in the Q90R package.

The Samsung HW-Q80R and other 2019 soundbars mark a collaboration between Samsung Audio Labs and Harman/Kardon, which is a recently acquired Samsung subsidiary. Between the two teams of experts, the sound output has been meticulously fine tuned for dynamic, spacious tonality and surprising musicality for such a compact configuration of drivers.

In case you are counting, that makes the Q80R a 5.1.2-channel system, with three front- and two side-firing divers along with the two upfiring height channel drivers. These are positioned upward to reflect sounds off the ceiling and into the audience.

Samsung also adds a redesigned wireless active subwoofer that seemlessly pairs via Bluetooth with the soundbar by pressing the power button on the supplied black smart remote. No fuss, no muss. The soundbar does a nice job handling deep bass tones and loud rumbling explosions, but we were also well impressed with the deep tones produced directly from the soundbar drivers. Vocals come across with a smooth high-quality depth of tone that is always clear and upfront against background effects and music.

In fact, the center-channel sound performed well against a reference 5.1.2-channel home theater system we had setup for comparison, minus the rear-channels that is.

We were able to pick up what appeared to be overhead effects of flapping bird wings and thunder claps from the Dolby Atmos Blu-ray test disc coming through the reflected height channels.

The 2019 Samsung soundbar line is designed for simplicity of setup and use. We were impressed with how quickly and easily the soundbar and subwoofer paired via Bluetooth and how easily the review sample interfaced with a connected 3-year-old 65-inch Samsung Q8C curved-screen 4K QLED television. Connections include a pair of HDMI inputs, an audio return channel (HDMI output) connection, and optical digital input. The system also has built-in Wi-Fi connectivity and a USB port for service updates only. A button is also offered for pairing the subwoofer and optional rear-surround speakers, if needed.

For compatibility, the soundbar supports HDR and 4K video pass-through via HDMI and is compatible with HDR10 format.

The bar portion of the Samsung HW-Q80R is identical to that of the HW-Q90R. This is black with a slight sheen, and has rounded corners and top front edge. The soundbar measures 48.5 (L) x 5.37 (D) x 2.34 (H) inches and has a substantial heft (19.4 pounds) indicating excellent quality of construction. The top, sides and front of the soundbar are clad in a matching black metal grille that lets sound pass without obstruction.

On the front right of the soundbar and behind the grille is a simple white dot-matrix LED readout indicating the settings for sound modes, volume, channel volume control, etc., all of which can be adjusted using the supplied Samsung curved black plastic remote that bears the dual-brand Samsung Harman/Kardon soundbar label.

In addition, Samsung places physical controls, consisting of touch-sensitive buttons for power, input selection, and volume on the top of the soundbar.

The size of the speaker bar portion of the system fit well below the screen of our 65-inch Samsung display, although we had to place it on top of the set’s curved base bar stand that juts out several inches in front of the screen. With some similarly configured television models this means tabletop placements will require deeper than typical surface area to place the soundbar a few inches in front of the stand. Alternatively, for wall-mounted placement, the HW-Q80R ships with brackets included in the box.

As mentioned, the Samsung HW-Q80R comes with seven channels including three front speakers (left, center and right), side mounted drivers on the left and right of the soundbar, and two up-firing speakers for the front left and right height channels. This is paired with the matching black powered active subwoofer that features a side-firing 8-inch driver and a rear-vented port. The floor-positioned 106-Watt powered sub measures 8.12 (W) x 15.93 (H) x 5.37 (D) inches (WxHxD) and weighs 21.6 pounds.

This year Samsung adds what it calls Adaptive Sound mode that analyzes audio output and processes the channel balance for the type of content being viewed. In this way, the system will know when a newscast, for example, is being displayed and the sound will be processed for the clearest dialog weighted toward the center channel. Similar adjustments are made to present the most realistic sounding presentation from music, sporting events, movies etc.

For gamers, the soundbar can detect an incoming signal from a PlayStation 4 or Xbox One console connected to an HDMI input on a 2019 Samsung TV to automatically adjust for the lowest possible input lag through the television’s game mode. At the same time, the soundbar shifts into the Game Pro sound mode. When game play is over and another program is tuned in, the system will automatically switch out of game mode, and back into the optimal picture and sound mode for the content.

The HW-Q80R’s Surround mode has the ability to upscale content to the available speakers. This means non-Dolby Atmos soundtracks, for example, can be processed to use the overhead channels to produce a more enveloping sound experience from conventional 5.1-content. This doesn’t produce fake-sounding overhead effects, but rather, better fills the viewing space from multiple directions.

For convenient access to personal music libraries, the HW-Q80R offers Bluetooth and Wi-Fi connectivity that can tap into mobile devices or wireless network servers to find a desired song, album, playlist or music streaming service. If a stored file happens to be of a high-res audio nature, the soundbar can decode a list of lossy and lossless audio formats including AAC, WAV, OGG, ALAC, AIFF and FLAC, with up to 32-bit support.

Of course Samsung includes support for its SmartThings App in the HW-Q80R. This helps to speed setup and enables controlling other compatible connected smart devices. For soundbar setup, users can install the SmartThings app to be guided step-by-step through the connection process.

Fans of voice-control operation will also enjoy hands-free use of features like Spotify Connect using the familiar Amazon Alexa platform. Users with an Alexa smart speaker or device can setup an Alexa skill for the soundbar to enable barking out orders to control the volume or access songs.

We found the Samsung HW-Q80R to be more than up to the task of enhancing the immersive viewing experience from a connected television, even a better-performing Samsung model. For our test, we connected a Samsung Ultra HD Blu-ray player to an HDMI input on the soundbar and ran an HDMI cable from the ARC output to the HDMI-ARC input on our Samsung TV.

Each of the devices made the handshakes for interoperability without issue. We were able to use the Samsung One Remote for the television to control all of the products in the package, including using the Samsung Bixby voice control platform in the television to adjust the soundbar volume. We sampled the 4K Ultra HD Blu-ray version of “The Lego Movie: The Second Part” with a Dolby Atmos soundtrack and found the sound to be dynamic and clear, with vocals prominently mixed to balance against the accompanying background music.

The HDR10 highlights passed through the soundbar to the television without problem, delivering a colorful 4K picture with bright specular highlights.

Dyamic sound effects like explosions and slamming doors were deep and well pronounced through the subwoofer without picture rattling or other room-related distortions.

Minus the rear-channels, the sound stage was more heavily weighted from the front of the room but the height channels helped to fill out the space and did reproduce discernible overhead effects from laser gunshots seemingly sending on-screen projectiles bouncing above, below and around us.

For music, we found the HW-Q80R presented a wide, disperse sound stage in Adaptive Sound mode. We sampled Yes’s Going For The One CD and found Jon Anderson’s vocals were clear, front and center weighted. The accompanying synthesizers and acoustic guitar finger picking in Turn of the Century seemed to send the airy sounds floating directly out of the soundbar and around us in the room — up to a limit. The lack of the rear channels acted as an aural brick wall of sorts.

For regular TV viewing, the HW-Q80R is a sold performer using Adaptive Sound Mode to balance dialog from talk shows and newscasts for the clearest result, while Surround mode took basic 2-channel audio and made it seem to fill most of the room to pleasing results.

Unfortunately, compared with our reference 5.1.2-channel home theater setup, the overall sound lacked the full directionality of sound that comes from having a layout with well calibrated rear-channel speakers, and we advise anyone interested in a full 3D audio experience to consider stepping up the extra $400 and getting the Samsung HW-Q90R. Nevertheless, the sophistication and depth of sound was impressive for a system this compact, and the $1,000 price tag is significantly lower than the cost of a better performing full home theater system.

The Samsung HW-Q80R is a remarkably bright, clear and adaptive soundbar that will handle your movies and television sound with aplomb, and earns an HD Guru recommended buy rating. It also has a host of features to make it easy to access and listen to your digital music collections or favorite streaming apps.

For a 3D-audio capable soundbar, however, the absence of rear channel speakers will be an issue for some people, and the add-on speaker kit that can be purchased after the fact lacks the rear-channel up-firing speakers for a complete 5.1.4-channel Dolby Atmos or DTS:X experience. If your intention is to listen to a lot of movies in either of these formats, we suggest you look into getting the Samsung Harman/Kardon HW-Q90R ($1,397.99).

The Samsung HW-Q80R Soundbar used for this review was a company loan.