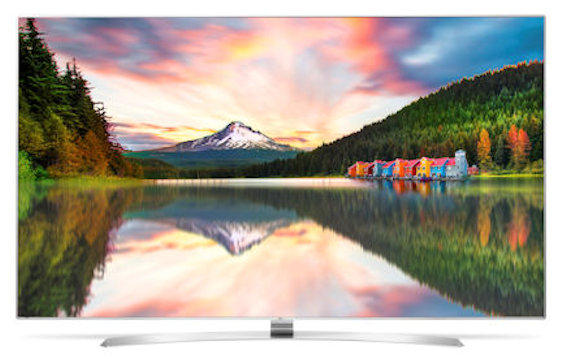 The Super UHD TVs are offered in three series, all with advanced picture quality features and support for high dynamic range (HDR) in both the HDR10 and Dolby Vision flavors.

Read more on the LG Super UHD 4K LED LCD TV line up after the jump:

All Super UHD models feature circuitry that LG calls “Billion Rich Colors,” using “10-bit processing power” in some models and 10-bit-like processing in others to render more than one billion possible colors for a more realistic looking image. All Super UHD models this year are edge-lit LEDs. None of the models offer full-array LED in 2016, LG said.

All Super UHD models also offer enhanced color reproduction from LG’s Color Prime Plus technology that creates vivid images with greater depth and realism by magnifying the range of colors that can be displayed on the screen, LG said. The sets will produce a wider color gamut that matches to better than 90 percent of the Digital Cinema Initiative’s P3 standard for professional digital movie theaters. They will also accept content produced with up to a Rec. 2020 color gamut and map it (not fully display it) using 3D color mapping to the capabilities of the screen.

“The viewing angle through (traditional) IPS offers two-times better off-angle color accuracy (60 degrees), and a contrast ratio that will maintain more brightness and black level even at wider viewing angles,” said Tim Alessi, LG new product development director. “That’s with our current IPS. We make some improvements on that with the new IPS system from LG Display with a new double layer of anti-glare and low-reflection film. On two of our higher-end series, the UH7500 to UH8500 Series will have these double layers that will reduce reflection and glare by about 45%. The 9500 series will use triple layers for even better black levels and wider viewing angles.”

In total, black level will be improved on several fronts, he said. One is in the new IPS system; another is the combination of local dimming and some detail-enhancing algorithms and a third uses a dynamic contrast circuit that analyzes the TV in three dimensions, looking at depth and improving the contrast appropriately, so there is more of a sense of reality, Alessi explained.

Similar to its 2016 LG OLED TVs, LG teamed up with premium audio manufacturer harman/kardon to give the LG Super UHD TV a deep, rich sound system.

Top-end models feature LG’s new ultra-thin UniScreen design, that combines with a nearly invisible bezel to make the TV appear to be floating on air. The 65-inch class 65UH9500 model measures 6.6 millimeters (about a quarter of an inch) at its thinnest point.

“At minimum the LG TV models  will all be able to decode the PQ curve — this is HDR 10 (or open HDR),” said Alessi. The company also announced Dolby Vision support at CES 2016.

“Ultra Luminance is one of things that Super UHD will employ for an up to 30 percent boost in brightness just where it’s needed, and there isn’t any appreciable boost in power consumption either,” Alessi explained. “It will even have some good circuitry to get the most out of even SDR content.” The UH9500 models feature a new thin-design concept that reduces the gaps between the panel and back cover chassis. The Billion Rich Colors system in the 9500 series uses a true 10-bit panel. Other features include an Ultra Luminance brightness boost, and 240 effective Motion Rate (120Hz native refresh rate). The screen measures just 6.6mm (.22 inches) deep and features a nearly invisible bezel, for a floating-on-air appearance, LG said.

The Cinema Screen design uses a four-sided even-formed bezel frame. The models also offer a built-in sound system developed in conjunction with audio pioneer harman/kardon that enhances the depth of audio. A new LG Magic Sound Tuning function measures and analyzes the viewer’s environment and makes adjustments to customize the sound to the room’s specific conditions. The TVs are 3D capable with passive 3D glasses.

Models include the following: