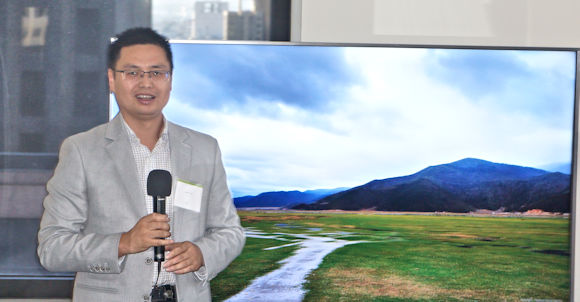 “At Hisense we are extremely proud of the picture technologies we put in every TV we make,” said Liu.  “We commit over 5 percent of our global revenues to research and development. This investment in research and development, efficient supply chain management and innovative manufacturing processes enable us to bring the best picture quality to consumers at more affordable prices.”

The new big-screen models on display included a 65-inch model in the company’s H9 Series; and a 70-inch in the H10 series, both of which employ the company’s ULED technologies, which enhance color, contrast, black levels, brightness and smooth motion. Also shown were new 65-, 70-, 75-, and 86-inch screen sizes in the H8 series, joining the current 50- and 55-inch models.

The 70H10, which will be available in early 2017 at a $3,499 suggested retail, will be Hisense’s first LED LCD TV to earn Ultra HD Alliance “Ultra HD Premium” certification, requiring 1,000 nits or better brightness, better than 90 percent DCI-P3 color gamut and 0.05 nits of black level or lower. It will use full-array LED backlighting with 320 zones of local dimming, is also expected to carry THX 4K certification and will offer a four-year warranty.

The 65H9D, which will carry a $1,699.99 suggested retail when it ships early next year, will feature: edge-lit “multi-zone” local dimming; HDR-10 support; dbx-tv sound; TruPixel UHD upscaler; and a four-year warranty.

“At Hisense, we are dedicated to continually pushing the envelope with innovative design, technology and value to the consumer,” said Liu. “It only makes sense that as we continue to grow our presence in the United States, we bring our approach to affordable luxury to the larger screen television categories as well.”

The new H8 series models include 4K HDR 10 streaming and playback, including 4K streaming from Netflix,  YouTube and others. The 65- and 75-inch screen sizes are edge-lit and offer multi-zone Local Dimming.  The 70- and 86-inch sizes feature direct LED technology and “Ultra Black Full Array Local Dimming.”

Both the 65- and 75-inch screen sizes feature a Pure Color wide color gamut that reaches greater than 83 percent of the DCI-P3 color spectrum, the company said.

For really huge screen sizes, the company will offer next year a single-chip 4K Ultra HD DLP short-throw projector with a laser lighting system. The projector is designed to be easily set up, with floor placement just a few inches from a wall or reflective screen surface. It will cast a high-quality image of up to 100 inches.

“We believe the future of the big-screen is panel-less, and our 4K Laser TV is evidence that size and picture quality can be more accessible,” Liu said.

The 100-inch 4K Laser TV offers HDR processing along with a UHD Upscaler, and will be available next summer at a $12,999 expected retail price.