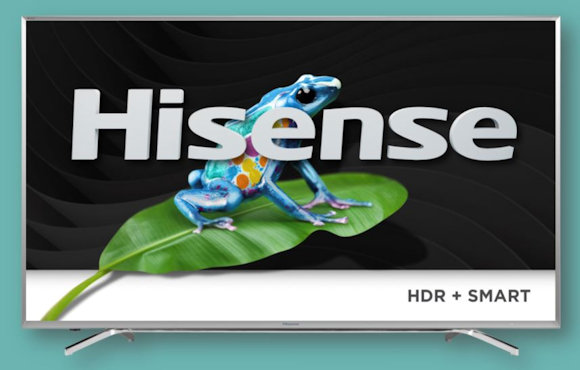 Hisense Gears Up To Seize Opportunities In Changing TV Market

As other popular television brands are feeling the pinch of failed acquisition plans and under-performing television businesses, China’s Hisense is gearing up for an expansion of business in the United States in 2017.

Mark Viken, Hisense USA marketing VP, told HD Guru Friday that challenges facing his competitors, Vizio and LeEco, in the wake of LeEco’s failed acquisition and the continued collapse of the once giant TV maker Toshiba in Japan, spell opportunity for Hisense, which by some accounts is the world’s third or fourth largest television maker.

“There’s a little bit of disruption in the force and we are looking at an opportunity to build the business behind our great products and great supply. Corporately, we are very sound financially and if there are opportunities, I don’t think the company will be afraid to invest in those,” said Viken.

A giant in its native China, Hisense, Viken said, has only scratched the surface of what it intends to bring to the U.S. and other global territories, where Hisense was known for many years primarily as an original equipment manufacturer for other TV brands.

Read more on Hisense’s accelerating marketing plans after the jump:

For starters, Hisense continues to advance its brand advertising efforts to make the moniker more top-of-mind among TV buyers this year. Viken said Hisense will continue to promote the brand both in the United States and internationally using key sporting events.

In the U.S., the company continues to focus on auto racing with sponsorships of seven different races throughout the year. This includes sponsorship of the Joe Gibbs Racing team, NASCAR Infinity Racing and the upcoming Hisense 4K 300 in Charlotte on May 27th.

Hisense also sponsors various E-gaming events and teams bringing with it multiple activations. It is currently working with Evil Geniuses, which is one of the most popular professional E-gaming teams.

Internationally, the company recently announced sponsorship of the 2018 FIFA World Cup soccer tournament in Russia. The sponsorship, which will bring exposure in more than 200 different countries, includes a bundle of global marketing and advertising opportunities for both the 2017 Confederations Cup and 2018 FIFA World Cup. This will encompass tandem logos, stadium advertising, on-screen credits and other tie-in activities. The first activities kick off in June with some of the confederation games taking place in Russia.

Viken said that through the FIFA Sponsorship Hisense will have access to 4K action footage from past FIFA events that will be used for demo material in retail partner stores shortly.

Hisense is using the event sponsorships to focus on several key high-end and step-up products including its new Laser Cast short-throw DLP video projector with pixel-shifted 4K video resolution. That product will launch in the United States later this year. It will also bring products like the new H10 and H9 4K Ultra HD LED LCD TV series to sponsored events.

As for the company’s U.S. retail activities, Viken said Hisense continues to expand its distribution base with key accounts. It currently has programs with every major consumer electronics retail chain including: Best Buy, Walmart, Amazon, Costco and others.

“Our focus is not only to continue that business but expand it, earning the business with great products and programs,” Viken said. “It’s not so much about getting more accounts but getting more support on the floor and more SKUs inside each retailer.”

Viken said the company is also looking to expand its business behind the Sharp TV brand. presence and related marketing efforts behind both Hisense and Sharp-branded television lines.

As for Hisense, Viken said the company aims to step up placement on selling floors to take advantage of the increased interest the brand has drawn following the release of the popular [amazon_textlink asin=’B01E6PGT90′ text=’H8′ template=’ProductLink’ store=’hc005-20′ marketplace=’US’ link_id=’61023299-2155-11e7-9e6d-33579cebdb94′] 4K Ultra HD LED LCD TV model line last year. That series did so well it was often sold-out or in low-inventory status at key times of the year last year, Viken said.

In reaction, Hisense has adjusted its inventory plans significantly. Viken said the company has secured its LCD panel needs and will be stepping up factory output to meet demand. This comes despite attempts by Hon Hai Corp., trading as Foxconn, to shut off LCD panel shipments to Hisense from its factories after Hisense refused to sell back the licensing rights to the Sharp. Hon Hai acquired controlling interest in Sharp after Hisense licensed the right to use the Sharp trademark on television sets in North America for at least five years. Hon Hai executives have said they would like to build the Sharp-branded marketing business  for their own interests.

“Our experience with the [amazon_textlink asin=’B01E6PGSGY’ text=’Hisense H8′ template=’ProductLink’ store=’hc005-20′ marketplace=’US’ link_id=’702f63d2-2155-11e7-8995-2904b5d5cfc1′] Series in 2016 has given us a lot of confidence that consumers appreciate the brand, the reliability and they appreciate not only the quality but the picture quality, certainly. A research study has found that consumers equate our quality to nearly that of a Samsung,” Viken said. “We are now going to move up the line with the H9 and H10. We think consumers will accept those as high-end products with all the technology has to offer, including quantum dot technology in the H10, HDR and then we will go a step further when we launch the Laser Cast TV this Fall.”