Looking for more high quality 4K Ultra HD movie and TV content to play on your new television set? It might be time to invest in a 4K Ultra HD Blu-ray player.

First introduced last spring, the category is rapidly becoming the playback device of choice for discerning videophiles. In addition to delivering 4K Ultra HD resolution (3840 x 2160 pixels), these new players will deliver high dynamic range (HDR) metadata–currently only the HDR 10 format is supported–at bit rates of up to 100 Mbps, far outpacing the best 4K streaming services that use bit rates of around 15 Mbps. Also, you won’t have to worry about buffering lags, or down-rezing to get content over congested broadband pipelines.

Images are stunningly rich, vibrant and accurate, with many titles delivering a wide color gamut exceeding 90 percent of the Digital Cinema Intitative’s P3 color space recommendations for professional digital movie theaters. The players will also support the latest 4K Ultra HDTV sets with high dynamic range metadata that will present a remarkably realistic range of contrast from nearly perfect black to 1,000 nits or more of brightness (depending on the capabilities of the display.).

In short, if you don’t have an Ultra HD Blu-ray player there’s a good chance you haven’t yet seen all the capabilities that your 4K Ultra HDTV set can deliver.

Read more of our buyer’s guide to 2016 Ultra HD Blu-ray players after the jump:

Right now, there are only five players to choose from. Samsung delivered the first one last spring in its UBD-K8500, which quickly sold out before fresh supplies could be replenished. The first players range in at $399.99, but prices have already tumbled significantly, with some good bargains available this holiday season.

The second and third Ultra HD Blu-ray players were delivered a short time later by Philips, through manufacturer P&F USA, at about the same price. The two Philips models have virtually the same features but differ by cosmetic design.

Panasonic then set the bar higher for a player that not only delivers high quality images, but state-of-the-art music in a high-performance A/V player.

Microsoft then made gamers happy by delivering its Xbox One S player with a built-in Ultra HD Blu-ray player in addition to playing advanced games.

Panasonic when higher end when it released its first Ultra HD Blu-ray player for the U.S. market — model DMP-UB900 — featuring precision circuitry and components designed to deliver not only state-of-the-art 4K video, but high fidelity music and surround sound as well.

As for the other usual Blu-ray player suspects, we await deliveries on players from Sony and Oppo, but those don’t appear to be coming now until early 2017. It’s also a good bet to expect additional models from brands like LG and others next year, as well. CES 2017 will give better insight on that.

The players available today have the ability to play new generation Ultra HD Blu-ray Discs that output video in up to 4K Ultra HD resolution (3840 x 2160 pixels), a wide color gamut (supporting up to the massive BT.2020 spec.), play high dynamic range (HDR) metadata for new generation 4K UHD TVs, and most of the other features found in Full HD Blu-ray Disc players. This includes all of the latest surround sound formats, including new object-based audio formats Dolby Atmos and DTS:X that include height channels in addition to 7.1 to 9.1-channel system set-ups or better.

Best of all, these new players will transfer data at bit rates up to 100 Mbps and will playback discs supporting up to 60 Hz frame rates, where available.

Both HDR and expanded colors in the Ultra HD Blu-ray format are made possible by a higher bit-depth of 10, compared to 8-bits on conventional Blu-ray Disc players. This helps to deliver smoother gradations of color with minimal banding.

Most 4K Ultra HD TVs available for the last year or so will have these, but lower-end models and 4K TV’s purchased before 2015 might not. It’s important to check you TV’s specs. Still, most TV’s made before 2015 won’t accept or display HDR metadata anyway, regardless of the input used. You will still be able to enjoy other benefits of Ultra HD Blu-ray without an HDR-supporting TV, but HDR is a dramatic improvement in picture quality and the most compelling reason for owning one of these new players.

Built-in upscaling technology in the UBD-K8500 enhances the picture quality from standard Blu-ray discs and DVDs, and consumers can also play CDs.

The unit will play most legacy optical discs with notable exceptions including: multi-channel SACDs and DVD-Audio discs.

It will also play most popular video discs including DVDs, Blu-ray Discs, and 3D Blu-ray discs, in addition to Ultra HD Blu-ray media.

The UBD-K8500 has two HDMI outputs. This enables one to be connected to an older A/V receiver that isn’t equipped with the latest HDMI 2.0a inputs to decode audio, while the other connects directly to the display carrying the video signal unfettered to an Ultra HDTV.

In addition, the player offers an SPDIF optical digital output, USB input and an Ethernet port. The player does not include any 5.1 or 7.1-channel analog audio outputs for use with pre-HDMI legacy multi-channel A/V receivers.

The player also offers built-in over-the-top streaming apps from major service providers like Netflix and Amazon, but at the time of release the player was not able to stream 4K Ultra HD content with HDR through that system. Many people with the latest 4K Ultra HDTVs will have that ability built into their TVs. Philips is sold two versions of an Ultra HD Blu-ray player it originally unveiled at CES 2016 last January, but now in the holiday selling season the only the BDP7501 model is widely available. The brand, which is licensed for use on TVs and A/V devices in the U.S. by P&F USA, introduced its first models at a $399 suggested retail price, but that has now fallen to $229.99.

The BDP7501 comes with a real brushed aluminum finish and includes a squarish ultra-compact design with a small foot print for easy placement among other AV components.

Like all Ultra HD Blu-ray players available so far, the BDP7501 will not support legacy multichannel SACDs and DVD-Audio discs.

Other features include: HDMI-CEC for multi-component control with one remote, Child Lock, Parental Controls, and USB Multimedia playback.

One of the strengths of the player is its ability to take 4K and lower-resolution streaming content and enhance and adapt it for display on the connected TV screen. The player is equipped with a Wireless LAN system, network drive access, and support for Miracast second-screen linking with Android devices, Ver. 4.2 and above. The player also features a web browser, and DLNA (Client & Renderer) network file sharing.

An SD card slot and USB port can be used for playing video, photo and music files through the UB900 on the connected TV and audio system. External hard disc drive playback from drives with capacities of 2TB or less and processing for NTFS/ FAT32 data is also supported by the player.

Two HDMI ports are supplied on the back of the player along with 7.1-channel analog audio outputs. One of the HDMI outputs conforms to the HDMI 2.0a/HDCP 2.2 specs and will  deliver both pictures and sound to a TV. The other is optimized to ship audio only to a compatible AV receiver.

The player has built-in apps and streaming support for popular over-the-top services, but at release none of these was able to stream 4K Ultra HD content or HDR.

One of these advances is the use of a 4K High-Precision Chroma Processor that takes 4K image color signals with 4:2:0 chroma subsampling as specified by the Ultra HD Blu-ray spec. and interpolates them for a 4K (4:4:4) look using a multi-tap chroma processor that produces more natural appearing textures and depth.

In upscaling, Edge Adaptive Chroma Processing is used for conversion of 4:2:0 chroma subsampling content on the disc to 4:2:2 and 4:4:4 to produce sharp edge transitions without blurring or overshooting.

Also, because Ultra HD Blu-rays are encoded in 10-bit video masters, the player is designed to upscale images to 12-bit accuracy to ensure 10-bit levels of gradation are maintained in the UHD BD pictures.

For those who aren’t using an HDR-supporting TV, the UB900 will adapt HDR sources to standard dynamic range (SDR) by converting the HDR tone curve and primary colors in linear RGB to more effectively remap them to SDR. The player even provides manual adjustment for brightness of the converted SDR signal to better match the capability of the display.

For realistic surround sound and music, the DMP-UB900 incorporates large-capacity electrolytic capacitors and a Mica capacitor to produce powerful room-filling sound while reducing digital noise from the power line. 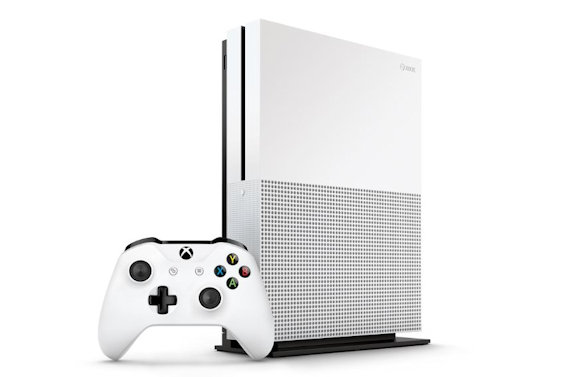 However, the player will only support 4K Ultra HD resolution in movie discs. Next-generation 4K Ultra HD gaming will have to wait for Microsoft’s more powerful “Project Scorpio” Xbox console slated for 2017.

The new Xbox One S consoles are available in several versions differentiated by internal hard disc drive capacity. The largest one has a 2TB hard drive. All feature a slimmer profile than the previous generation Xbox One, and new controller.

Microsoft updated the Xbox One and the latest Xbox One S gaming console (with 4K Ultra HD Blu-ray support) with the ability to playback Dolby Atmos 3D surround sound via bit stream. All of the stand-alone Ultra HD Blu-ray players also offer this ability.

These formats deliver height channels to compatible surround sound systems. Of course, you’ll have to have the necessary AV receiver and compatible speaker accompaniment or a Dolby Atmos sound bar to get the benefit of the update.

It should be noted that when first released some 4K UHD TV models had compatibility issues with the Xbox One S system, however, in many cases these has now been resolved with firmware updates in the TVs or the gaming console.

Black Friday Specials Not To Be Missed

Things To Consider When Buying A Holiday TV