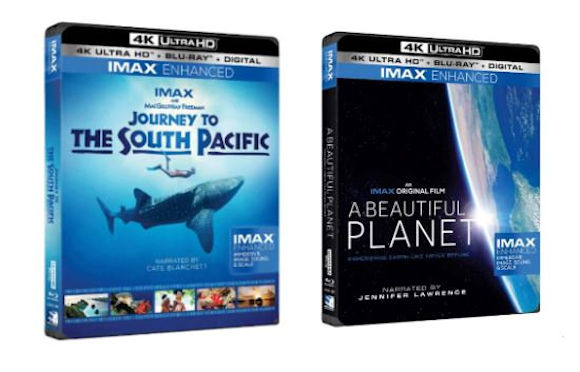 The titles include: IMAX: Journey to the South Pacific and IMAX: A Beautiful Planet. Both are available for pre-order at $34.98 each from Amazon now.

Both titles were originally produced for very large-screen IMAX theaters with advanced surround sound systems. With inclusion of the new IMAX Enhanced format, home theater systems with new IMAX Enhanced Certified televisions and home theater components will be able to present images and sound in a way that attempts to replicate much of the theatrical experience at home.

Supporting 2018 Ultra HD AV receivers from Denon and Marantz and Ultra HD televisions and projectors from Sony will have IMAX Enhanced modes that will playback specially produced content that adjusts and embellishes images and sound using IMAX technology and parameters. These are tailored to present 4K UHD pictures with HDR10 (the static metadata form) capable of producing increased brightness and diminished visible background noise.

The IMAX Enhanced program is intended to reflect the proprietary technologies IMAX developed for its theaters and special IMAX 70mm projectors that deliver higher brightness than typical professional projection systems while preserving the 70mm aspect ratio.

The new IMAX home cinema version is also processing content to better fit as much of the original frame on screen as possible without the need of visible letter boxed borders. This will keep much of the viewing area of taller aspect ratios IMAX requires for its massively squarish theatrical screens.

At the same time, both titles support DTS:X, the 3D object-based surround sound format developed by DTS, and optimized in partnership with IMAX for playback using the IMAX Enhanced mode.

IMAX has said that to get the most out of these new picture and sound quality optimizations, IMAX Enhanced certified products will be required for playback. But special products are not required to play the disc back without all of the enhancements. In addition, the content should look and sound better than other discs played on legacy equipment because of the meticulous way IMAX works with content creators to produce and grade disc transfers for the home.

Some of the first IMAX Enhanced products from Sony, Denon and Marantz will be on the market by the time the new Ultra HD Blu-ray titles hit stores in December.

Meanwhile, multiple reports mostly out of Europe have said the discs will also be the first to support the Samsung, Panasonic and Fox-developed HDR10+ HDR profile. Attempts to reach Mill Creek Entertainment were not successful at press time.

This means viewers with HDR10+ supporting Ultra HD Blu-ray players from Samsung and Panasonic, and most 2018 and some earlier Samsung 4K Ultra HDTV models, will be able to see the benefit improvements of Samsung’s dynamic metadata HDR profile.

Panasonic is not distributing 4K Ultra HDTVs in the United States through retail at this time, but the company’s DP-UB820 and possibly coming DP-UB9000 4K Ultra HD Blu-ray players in the U.S. also support the HDR10+ profile.

However, no Samsung or Panasonic products support IMAX Enhanced certification at this time, meaning no one will be able to take advantage of both enhancements at the same time. The equipment in the home theater set-up will determine which of the two features a system will support.

Like Dolby Vision, HDR10+ content should be able to offer grading for HDR brightness and color on a scene-by-scene basis, instead of grading HDR elements at one set of parameters for the entire length of the movie. HDR10+, which is supported by Samsung, Panasonic, Fox,  Warner Bros. and others with new members growing, makes use of advanced tone mapping techniques to present the dynamic HDR elements on supporting televisions for more realistic looking pictures.

As it currently stands, IMAX Enhanced certified Sony televisions and projectors will make use only of the HDR10 baseline (static metadata) HDR profile from the discs. They are not designed to specifically playback HDR10+, but Sony televisions are engineered to provide the company’s own tone mapping approaches that should playback the discs with dynamic metadata like results.

It remains to be seen how the final presented results will differ.

A Beautiful Planet and Journey to the South Pacific are both science and nature documentaries that were popular in top-level IMAX theaters, and are narrated by award-winning actors.

A Beautiful Planet uses images shot on IMAX 70mm cameras by astronauts in Earth’s orbit. Narrated by Academy Award winner Jennifer Lawrence, the film documents the Earth as seen from the International Space Station with footage showing the effects humanity has had on it over time. This includes blazes at night, and the electrifying effects of human expansion on the environment.

Journey to the South Pacific is narrated by Cate Blanchett and features images of the lush tropical islands of remote West Papua, with footage shot both above and below the sea. The film captures a range of tropical life including whale sharks, sea turtles, manta rays, and other iconic marine creatures.