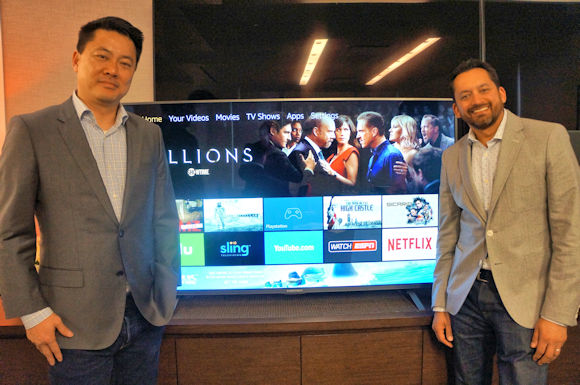 TongFang Global, manufacturer of televisions sold in the United States under the Element and Westinghouse brands, formally introduced Tuesday the first 4K Ultra HD televisions to incorporate the Fire TV operating system without the need to add on a separate set-top box or HDMI-connected media adapter.

Called the “Element 4K Ultra HDTVs – Fire TV Edition,” the televisions will fully implement the Fire TV OS giving users faster and snappier access to a host of streaming apps, including Netflix, which is prominently featured, and of course Amazon Instant Videos.

The TVs will have the same advanced content search and recommendations system used in its latest popular Fire TV set-top box and Fire TV Stick, with programs culled from user search and viewing data prominently featured in scrolling ribbons of program thumbnails on the set’s home page.

Like other Fire TV devices, the new TVs will also feature Alexa-assisted voice search and control commands via a mic built into the special Fire TV remote that ships with the TVs. The remote is virtually identical to those offered with the advanced Fire TV outboard adapters, sporting a diminutive, minimalistic button design that features the Netflix fast-access button prominently. All of the Element 4K Ultra HDTVs – Fire TV Edition will be Netflix certified models, assuring Netflix is prominently positioned and ready for fast loading and content playback.

Gone from the market this year are TongFang’s Seiki and Seiki Digital television lines, while the focus shifts to a dual-brand television strategy.

Neither the Element nor Westinghouse versions will support high dynamic range (HDR), although Amazon and Element executives said the plan is to add that capability in second-generation lines for 2018.

Sandeep Gupta, Amazon SmartTV and home VP, explained that the decision to launch with a 4K Ultra HDTV that does not support HDR was made because Amazon wanted to launch the integrated platform with a higher value smart TV experience at price points that would be attractive to mainstream consumer audiences. He said both Amazon and TongFang were conscious of not crossing into either premium or opening price point territories. Next year and beyond, Amazon, TongFang, and perhaps other Fire TV licensees, might look to venture into broader feature/price assortments including HDR, Gupta said.

“Our goal is to be known as a company that provides a premium experience at non-premium pricing,” he added. “Despite the affordable pricing this is a best-in-class smart TV experience.”

For perspective, Gupta pointed out that as an add-on adapter, Fire TV is the No. 1 streaming media product in the United States. Over the years, Amazon has continued to revise and improve its Fire TV products, introducing full Alexa integration last year. More recently, the company redesigned the whole user experience to be “more cinematic and more content forward” for users.

“In developing our first integrated Fire TV product we wanted to make sure we weren’t just taking a TV and slapping the Fire TV experience on top of it. We wanted it to be a lot more,” Gupta said. “So, we set out to remove a lot of the pain points in watching TV. Things like watching Live TV, input switching, how do we make that experience better for our customers? We also set out to provide better integration of other third-party content, so things like Netflix, Starz! etc. are featured more prominently. One of the things we were dinged on in the past was that we were pushing just Amazon content. So, we took an active role in making sure we were highlighting third-party content as well as our own.”

The home screen now includes a “Your Videos” section that aggregates all of the videos owned or rented online by the viewer, regardless of service. In addition, a feature “rotator” has been added where Amazon and its partners can highlight new content with short video clips and additional information to aid in the program discovery process.

The home screen also includes a row of program recommendations grouped by Ultra HD resolution to make finding 4K movies and TV shows quick and easy for set purchasers looking to view the highest picture quality content available to them.

Overall, Gupta said the recommendation presentation has been redesigned “to break the app paradigm, because we don’t think that’s what TV’s about.”

Amazon, he said, also wanted to make sure the experience was very fast. So, a function called ASAP was developed to allow some pre-buffering of content to eliminate the lag before a program begins.

“There’s no loading or waiting for a program to start. You click the selection and you all of a sudden just jump into watching the program,” Gupta said.

The Fire TV sets were also designed to be easier to find and call up live TV programming both from the Internet and from over-the-air broadcast sources. Local program listings will be automatically aggregated into a program grid guide that users can navigate with the TV remote.

At launch the service will not integrate listings from cable or satellite TV provider services, but Gupta said Amazon is working with the respective services to have such programming information added into the TV on-screen GUI.

In the meantime, users can easily find connected source devices, like cable and satellite boxes, to enable using the on-screen grid guides supplied with those services.

Gupta said Fire TV Edition TVs will also include an “X-ray” feature that allows users to dig down into a program that is listed to read information supplied by IMDB about the movie or television show, its various stars, director, etc.

As for the TV manufacturer’s contribution, Sung Choi, Element/Westinghouse TV brand marketing VP, said the Fire TV Edition sets under both Element and Westinghouse have been designed from the ground up to be better smart TVs.

“We have designed these TVs to include the best-in-class quad-core processor from Mstar,” said Choi. “The chipset has a built-in GPU which will enable high quality gaming, and we have added 3 GBs of RAM memory, which is more memory than we’ve ever put in a TV before. On top of that we have 16 GBs of internal storage memory.”

Choi said the TVs also support Bluetooth connectivity with compatible wireless devices, like headsets, and feature built-in Wi-Fi with an antenna that runs the length of the TV bezel for maximum reception range.

In addition to Amazon, retailers that will be carrying the Element 4K Ultra HDTVs – Fire TV Edition will include Target and Meijer, with others to be announced by delivery time in June.