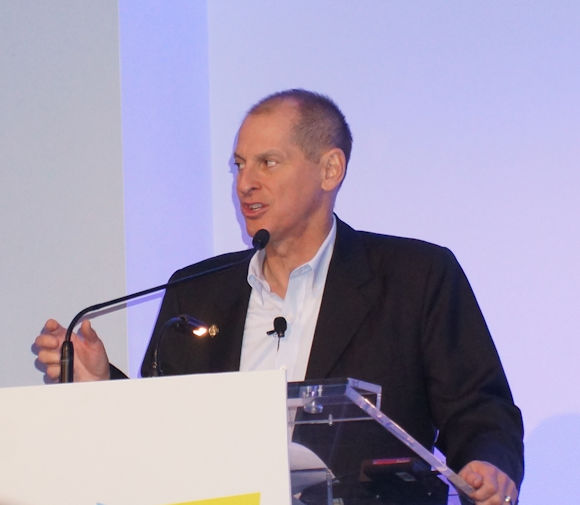 Gary Shapiro, CTA president and CEO, (pictured at top) commended the spirit of Pai’s intention to quickly move the country forward on adoption of the new technology but added: “However, while well-intended, this initial version includes troubling language about a TV tuner mandate. We stand by our initial joint filing supporting a voluntary, market-driven transition. We also support the Commission’s tentative agreement that a TV tuner mandate is unnecessary.”

Pai circulated the NPRM Thursday morning as part of a pilot project to let the public see items the FCC plans to vote on. The NRPM would allow TV stations to start rolling out the ATSC 3.0 advanced TV transmission standard on a voluntary basis, with the goal of authorizing the new standard by the end of the year.

Read more on the controversy over a possible ATSC 3.0 tuner mandate after the jump:

Pai’s NPRM authorizes the voluntary use of ATSC 3.0 while requiring stations to continue to deliver an ATSC 1.0 version of their signals. It also proposes to require multichannel video service providers to continue to carry the ATSC 1.0 signal but does not require them to carry ATSC 3.0 during the transition to a new standard.

The ATSC 3.0 proposal does not include a mandate that consumer electronics manufacturers include ATSC 3.0 tuners in televisions now, however it is seeking comment on that tentative conclusion.

The NPRM acknowledges comments submitted under a joint petition filed last April by the CTA, National Association of Broadcasters (NAB), America’s Public Television Stations, and the Advanced Warning and Response Network (AWARN). For example, the request that the FCC allow a simulcasting partnership in which two stations in a market share spectrum so that one station would deliver the primary ATSC 1.0 signals of both stations with the other delivering the ATSC 3.0 stations.

Broadcasters have promised to simulcast their signals during voluntary market-by-market rollouts given that the standard is not compatible with current TV sets. However, some consumer and broadcaster advocates are seeking assurances that the packing of multiple network TV signals on a single 19 Mbps ATSC 1.0 channel won’t negatively impact the bit rate of a given network signal or limit the multiple sub-channels available on some ATSC 1.0 stations to broaden programming diversity.

Shapiro applauded the innovation and benefits that ATSC 3.0 will bring including 4K Ultra HD resolution, High Dynamic Range, advanced emergency alert information, mobile reception and other innovations, adding that it will be a win for consumers. However, he seeks to avert a government imposed mandate that all televisions include potentially expensive new ATSC 3.0 tuners along with ATSC 1.0 versions at a time when many consumers receive the same stations over multichannel pay-TV services or via internet streaming services, and because it may take years for the transition to be completed in every market around the country, making the tuner effectively useless in non-transitioned markets.

But the CTA reaffirmed its joint petition with broadcasters supporting a voluntary, market-driven transition, and the tentative agreement that tuner inclusion was not required.

“CTA has long been an advocate for the development of this voluntary rule and applauds the FCC’s swift work to make the most immersive broadcast TV viewing experience a reality,” Shapiro stated. “We look forward to working with the Commission to move the proposal forward as originally intended to bring the benefits of this standard to American consumers nationwide.”