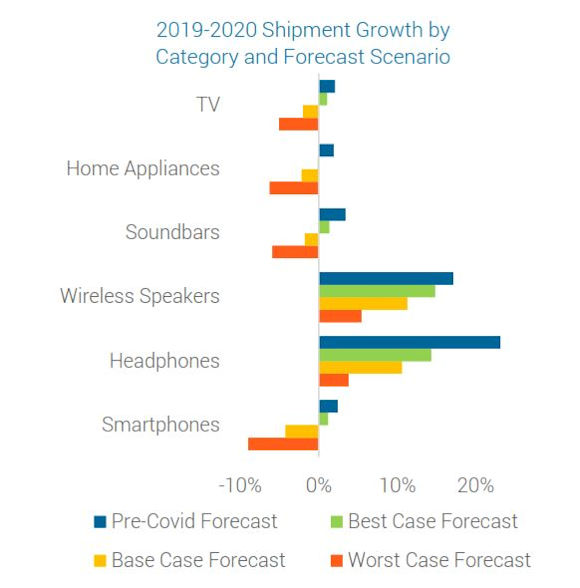 The impact of the COVID-19 pandemic continues to reverberate across the consumer electronics industry and into consumer homes as leading market research trackers continue to reduce their TV set sales predictions for 2020.

Like the stock market, the uncertain nature of the television industry can make for a challenging decision today about when is the best time to buy a new television to help weather the storm. It’s difficult to say if we should trust traditional barometers for promotions and availability.

The HD Guru expects that many with available discretionary income who are locked up at home and in need of another big screen to avoid conflicts with kids playing video games while the adults monitor the latest news reports should go with the flow and will make a purchase via Amazon or another ecommerce retail source ASAP.

But those feeling the pinch of these difficult times are probably better off waiting until next year.

Unfortunately, those waiting anxiously at home for the start of key sports seasons, championships and even the 2020 Tokyo Olympics will, in some and perhaps all cases, have to wait a year for the games to resume. This, of course, takes away key drivers of TV set purchases.

“The impact of the postponement of the Olympics has a relatively minor hit to U.S. TV demand than it does to other regions, Europe and Latin America primarily. However, in those cases as well, the direct impact of the coronavirus is more severe anyway. Typically the Olympics and Euro Cup soccer tournament lead to a 3-5 million unit upside to TV demand worldwide,” observed Paul Gagnon, Omdia/IHS Markit executive director.

According to one of the most recent indicators for the severity of the current and potential downturn in TV shipments and sales from the Omdia/IHS Markit research this week showed revised global TV shipment forecasts for a global decline of 22 million units, from 225.5 to 203.5 million units for the year.

“The biggest downward adjustments were to North America and Europe, where we expect the lockdowns and non-essential store closures to have a huge negative impact at least for the next quarter, with modest improvement toward the end of the year assuming a gradual progression back to normal economic conditions,” Gagnon told HD Guru.

The North America TV forecast for 2020 was reduced from 42.1 million units to 34.2 million units, a 19% reduction. While such a decline can be devasting for anyone trying to sell a television, the ramifications for adjustments to supply production could make looking for a particular TV model like shopping for toilet paper if the coronavirus pandemic becomes more severe.

“I think the demand for Q2 could be cut by 40% from the previous forecast, which would be a 45% [year over year] decline. Best Buy is just starting to shut stores except for curbside delivery, and Amazon is prioritizing delivery of essential households goods. We think consumers are going to be prioritizing saving and spending on only necessities. Although during the 2009-2010 period TV sales were increased in the U.S. after the Financial Crisis, due to consumers cocooning at home and cancelling vacations and big purchases, this time seems different due to the more extreme nature of the crisis,” Gagnon told us.

The unprecedented nature of the crisis is making it difficult for manufacturers and researchers, alike, to plot the possible outcomes to help gauge supply/demand/pricing over the course of the year.

Although people weathering the crisis at home is certainly boosting television use and content viewing, it’s unclear if consumers in need of a new or additional TV set is willing to make such a purchase online, with a large segment of the population worrying about the both the short and long-term economic impact on their pocketbooks and even careers.

Elsewhere, TV shopping via e-commerce is providing a viable solution for some, however.

“E-commerce for TVs is already big in Asia, but in North America and Europe, brick-and-mortar stores are still a dominant outlet for TV sales,” Gagnon said. “This may well change radically after this new period of commerce that is emerging. It’s a very dynamic time right now, changing daily.”

In addition, the Futuresource report recently indicated that predicted declines in average sales pricing on finished TV models resulting from the expansion of TV panel factories in China and other parts of Asia could be wiped out if delays in panel and finished goods production sees further delays.

“In the long run, Futuresource expects to see Consumer Electronics vendors diversify their supply chains. Having already faced disruption in 2019 due to the Sino-American trade war, COVID-19 has further highlighted the risks associated with over-reliance on Chinese manufacturing,” the Futuresource “Perspective On Coronavirus” states.

So what this means for anyone in the market for a TV set right now is largely up to your need, resources and comfort with purchasing a television remotely. 2020 premium and upper-tier television models recently began hitting the market from Samsung, LG, Sony, and others. Manufacturers are also still clearing out pipeline inventory of 2019 models, offering some aggressive deals while they last.

If you aren’t adverse to shopping for a telelvision over the internet, or by telephone, and having it delivered by truck (when available) this might be the best time of the year to make a purchase. Just keep in mind, conditions are changing almost daily and it might well be that toward the end of the year, manufacturers and retailers will have pent up inventory to get rid of, which could result in forced clearance promotions with bargain prices. It’s a crap shoot.

In short, if you can afford it and need a television now to take the strain off any cabin fever your family might be suffering while trying to avoid one from the novel coronavisus, go for it.