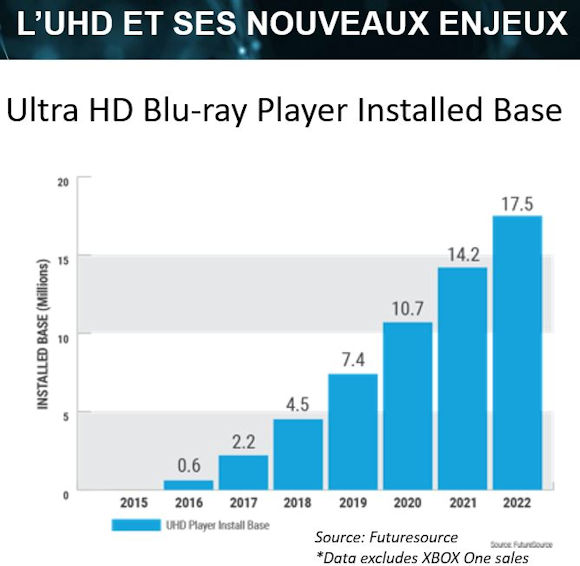 4K Disc Players Conspicuous By Their Absence From CES

The show traditionally has been the launching pad for the new year’s player models, but none were to be found this time out. Manufacturers said they had nothing to show at this time, meaning players could be coming later in the year, or, as in one manufacturer’s case, the prior year’s models are at least for now being carried over without a model refresh.

Gone was the boasting of the superior transfer rates, picture and sound quality, multi-disc format compatibility and built-in streaming platforms of the latest physical media players, which had been a part of shows to varying degrees in the past five years.

Most of the player manufacturers still in the category gave us empty answers to our questions about plans for the category in 2020. Press conferences of Sony, LG and Panasonic said little beyond Sony’s declarations about its plans for the PlayStation 5, which were previously announced as supporting Ultra HD Blu-ray playback as a side benefit for the next-generation console that will enable 4K/HDR gameplay. The device will also support some level of upscaled 8K gaming to feed the nascent 8K TV category.

Microsoft made no CES 2020 timed announcements but its forthcoming Xbox Series X gaming console, due to arrive around the holidays to go up against the PlayStation 5, already has been announced as continuing to offer an Ultra HD Blu-ray optical disc reader, like the Xbox One S and X generations before it.

LG executives said they would carry over their existing value-oriented Ultra HD Blu-ray player lines, making it the second year in a row for the practice.

Furthermore, the multi-industry promotional association for home entertainment media (and former proponent of physical media in particular) — the Digital Entertainment Group (DEG) — dispensed with its traditional practice of recognizing and awarding top hardware (including Ultra HD Blu-ray players), disc titles and top supporting retailers at its annual industry party, taking up a brief amount of time to talk to the growth in the digital streaming segment of the business.

Even the Blu-ray Disc Association (BDA), which has traditionally met with the press to give the format a state of the category assessment, typically to show accelerating growth levels, was conspicuous by its absence.

We proactively managed to track down at CES 2020 some media representatives who have worked with BDA members to get the most recent sales and growth stats available. The results showed continuing growth for the category, though not at the levels we might have expected compared to the strong growth of 4K Ultra HDTV sets. The disappearing promotional support and silence from manufacturers concerning the category is alarming for videophiles who value the superior performance benefits physical media provides over digitally streamed content. But the convenience of subscription streaming services appears to be winning out over movie purchases for the studios’ promotional spending.

The numbers indicate that while demand for the physical media format exists, it’s not the thriving category that the original Blu-ray Disc format was at this point in its rollout. The defections of Samsung and Oppo from the manufacturing ranks last year didn’t help, and an apparent state of apathy prevails with regard to Ultra HD Blu-ray promotion, even in advance of the launch of next-generation Ultra HD Blu-ray movie-supporting gaming consoles. In short, the format appears to be unlikely to grow beyond a niche category for video enthusiasts.

According to regional software shipment charts from Futuresource, the remaining volume is shared between Latin America; Eastern Europe and the Middle East/Africa.

In the United States (the largest market region for the format), Ultra HD Blu-rays are estimated accounting for 16% of Blu-ray Disc titles sold world wide in 2019. That percentage is predicted to rise to 50% by 2023.

As of Dec. 1, 2019, the Futuresource data indicated over 1000 Ultra HD Blu-ray titles are available. Title availability is broken out by the following countries:

Meanwhile, the research slides indicated that studios are going deeper into their catalogs to remaster films for the format. Among the most popular such releases are the following: The Wizard of OZ; Alien; and Scarface.

Despite the virtual absence of any new models at CES 2020, the BDA research touted a still “healthy line-up” of Ultra HD Blu-ray devices, which included 14 active 4K UHD BD players under various brands, with entry prices starting at $149.

Remaining to be seen is what impact, if any, the emergence of next-generation gaming consoles will have on the popularity of the 4K Ultra HD Blu-ray movie market. Although many major Hollywood studios continue to support the format with major new releases not all of them seem to be marketing the format as aggressively as in the recent past. Global sales of new movies continue to favor DVDs over 4K Ultra HD Blu-ray and even standard Blu-ray Disc formats.

Clearly, the brands that remain in the category have been able to manage discounting and are likely harvesting the category, making sure that ASPs don’t fall any farther.

As we previously reported on the fate of physical media in general, U.S. market research firm the NPD Group, which analyzes actual sell-through volume, cited year-to-date (YTD) unit sell-through of U.S. Blu-ray players (including UHD Blu-ray) for the January-October 2019 period was down 27% from the same period in 2018 and dollars had declined 17%. We were told the firm no longer breaks out 4K Ultra HD Blu-ray player performance for public distribution.

As of the third quarter, NPD said the average selling prices (ASPs) of disc players had stabilized, at $192, up from $169 in 2018, which is an indication that more 4K UHD Blu-ray models are being sold as available players for legacy formats, like DVDs, DVDs and standard Blu-rays are handled more and more as a feature of the more expensive 4K Ultra HD Blu-ray category.

NPD’s 2019 forecasts for overall U.S. Blu-ray player sales for the year was for a 25% unit sales decline and a 23% decline in retail dollar volume. The group’s 2020 forecast for all Blu-ray player sales mirror’s 2019’s with overall disc player units down 25% and dollars down 24%.

According to a post-CES 2020 home entertainment content market data report shared by the DEG, consumer subscription streaming, digital movie sales and digital movie rentals over the Internet, continued to evolve and grow. The DEG-released data estimates consumers spent $15.9 billion on subscription streaming, which now accounts for 63% of the entire home entertainment market – a 23.7% spike from 2018.

The DEG said rental spending dropped 12.3% in 2019 to $3.4 billion. Disc rentals slipped 19.5% to $1.44 billion, the biggest segment coming from kiosks, which finished the year with estimated sales of $884.6 million. Redbox leads the kiosk market, with more than 40,000 red vending machines, generally situated at large grocers and mass merchants such as Walmart.